Live and study in the capital of the United Kingdom, one of the most diverse and dynamic cities in the world. Experience this culturally vibrant metropolis that hosts more than 32,000 music performances and 17,000 theatrical performances each year. Visit world-class museums including the Tate Modern, the British Museum and the National Gallery. Explore UNESCO World Heritage sites like Greenwich, the Tower of London, Westminster Palace and Kew Gardens. Immerse yourself in the bustling city life or explore the many peaceful green spaces in and around your new home. As the United Kingdom's capital, London offers something for everyone, from the British Museum to the West End theaters, from the Tower of London to the House of Parliament and from ancient Roman ruins to the London Eye.

Start planning your experience abroad! The GEO London Center offers programs on topics such as:

View All Programs at Our London Center

Looking for inspiration for your programming at GEO Centers? Consider some past programs that align well with these locations.

Build a Program in London GEO’s Center in London, United Kingdom, is located in a townhouse built around 1720 on a quiet street in Bloomsbury, London’s literary and university district. Only a ten-minute walk to the British Museum, the Center is superbly positioned for access to public transport with tube stations and bus routes close by, as well as many of London’s principal galleries, museums, and theaters.

Students participating in longer-term programs at the London Center (a quarter or longer) have the opportunity to take part in customized internship placements unique to their needs. A required internship seminar is offered in conjunction with this experience to help students acclimate to work culture in Britain and their specific internship placement.

Curriculum Vitae for all staff and faculty are available upon request. 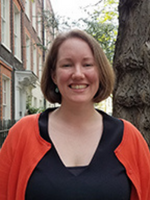 Dr. Amanda Milburn
Site Director
Amanda is responsible for all academic programs at the GEO Center. A native ‘Brit,’ Amanda is half-Scottish, grew up in England, and lived in Wales for almost a decade before moving to London. Her academic background is in nineteenth-century British history, with a focus on gender, class, and national identity. Amanda particularly enjoys helping students navigate British society and culture, and has been working with GEO since 2016.
Image 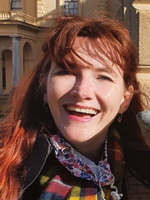 Mary Hiles
Assistant Director
Mary Hiles essentially manages the GEO in London Centre and tries to ensure everything runs smoothly. She organises excursions and bookings, creates timetables, organises visas, chases faculty, communicates with students, tells jokes, orders toilet rolls, and makes sure the building doesn’t fall down. Mary loves London. She is particularly fond of the many opportunities to indulge her passion for music and literature, having tossed a coin to choose the latter as her degree subject (her post-graduate studies were more carefully considered). She has an English degree from the University of Southampton and a Master’s in Modern and Contemporary Literature from the University of London.
Image 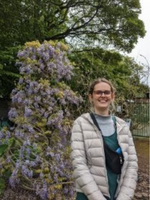 Noémie Oster
Programmes Coordinator
Noémie Oster is our Programmes Coordinator at the GEO in London Centre, supporting Amanda and Mary in the organisation and managing programmes and activities. She is a lover of languages, having grown up in a French household and studied Spanish and Portuguese at the University of Bristol. When not at the Centre, Noémie can usually be found at Hurlingham Books, the National Gallery or at one of the many theatres in the West End.